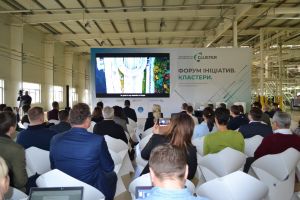 Is Transcarpathia a leader in economic transformation and one of the most promising platforms for business development in central and eastern Europe?
At least, the region has every chance of becoming one and, hopefully, not all opportunities are still lost.

“Forum of initiatives. Clusters of Transcarpathia ”, which was held with the support of the Automobile Federation of Ukraine in the form of panel discussions directly at the production site of the recent Eurocar plant near Uzhgorod, brought together company owners, industrialists, manufacturers, heads of key enterprises, employers, foreign investors and representatives of the expert environment. The event was attended by owners of top manufacturing enterprises in Ukraine and the region, the leadership of the Federation of the automobile industry of Ukraine and the Federation of employers of Ukraine, representatives of the government and local authorities.
We had the opportunity to analyze the current situation, opportunities, and also the conditions for the further development of the existing capacities of many local enterprises. The facts speak for themselves. You will not find such a constellation of world brands in any other region, you have already placed your modern, exclusive and high-quality production in Transcarpathia and created a large number of jobs. It would be superfluous to recall such advantages as a favorable neighborhood with European countries, a transport and logistics infrastructure, available energy and land resources, a relatively cheap and skilled workforce, and a progressive business elite open to changes.
“Transcarpathia is an already formed industrial cluster, apparently so far invisible to the country and Europe” - Oleg Boyarin, Chairman of the Supervisory Board of Eurocar PJSC.
Since 2001, with the adoption of legislation “On the special economic regime of investment activity in the Transcarpathian region” and “On the special economic zone“ Transcarpathia ”, the region opened a window for investment and made an economic breakthrough in the development of business and the production of exclusive high-quality products, as well as laying prerequisites for the introduction of a cluster model of the economy, today it is positioning the westernmost region of Ukraine as a flagship of economic transformation and a role model in other regions our many homeland.
“The cluster is a logical way in the direction of interaction, cooperation and trust, in the introduction of new technologies, for which it will not be a shame. I hope for cooperation and understanding that we are united by common goals, idea and tasks to make each other stronger and richer, ”said Oleg Boyarin, Chairman of the Automotive Industry Federation of Ukraine, Chairman of the Supervisory Board of Eurocar PJSC, during the forum.
Such enterprises with foreign investments as Jabil, Yazaki, Eurocar, Fisher, Groclinin Group, Flex and about a hundred others, mainly working in the automotive industry, electronics and other high-tech manufacturing, appeared on the map of industrial facilities.

For example, Jabil is one of the powerful plants located on Ukrainian soil in Transcarpathia. 3000 Ukrainian work in 4.0 industry at home. And the company plans to increase the number of employees to 5,000 over the next three years.
The construction of a new line has already been completed. High labor productivity, manufacturability and continuous staff training allows the Ukrainian company to win an order for international multinational and local companies.
Today, the production of Jabil is 60% means of telecommunications, 5G equipment. Other - equipment for the automotive industry and household appliances. By the way, the fate of motor vehicles in the production of the company is growing - from 2% to 10% over the course of several years, and this is important for the decline in the total volume of orders in the global automotive industry.
The Eurocar plant in Solomonovo is a modern automobile factory with available production capacities of 80 thousand cars per year (SKD assemblies - 30 thousand cars, CKD assemblies - 50 thousand cars per year) with the potential for further expansion of capacities up to 100 000 cars in year. The production site has a railway terminal capable of transporting to the EU and CIS countries, provides convenient access to a capacious export market.
Despite the availability of convenient logistics, access to the EU and low-cost format, while the Ukrainian auto industry is experiencing several major problems:
1. Lack of understanding by the government of the importance of industrial policy, insufficient level of state participation and support in the struggle for investment in the industry.
2. Outflow of personnel.
3. Lack of demand for new high-quality cars in Ukraine and preferences on the used car market.
4. Low rates of adaptation to the global transformation of the automotive industry.
As a result, in the current conditions - a low standard of living of the population, benefits for used vehicles - Ukrainians prefer second-hand automobiles from Europe over the world, not counting global trends in environmental friendliness, economy and innovation.

That’s a pity, since 2005, the preferential regimes of SEZ and the sovereign guarantors have been pinned on rock. To that very fact, Winikaє such a visoka needs to be doubled up in the format of clusters. Adje cluster - in the middle of nowhere, synergy of competitors for reaching goals, as well as leather company okremmo reach is unremarkable. Viddak, held by the economic forums, round tables and the most important group with important crooks in the struggle for the development of a tidy business middleware and the opportunity to respect and respect them. Scho і vidulos on zustrіchі Forum ініцітив. Clusters of Transcarpathia ”, the pledged bags were no longer extinguished, and specific propositions were consolidated in direct response to high-impact global reactions to international trends, as well as to experts, as well as experts.
We take up Maybutnim of Ukraine and the region of secrecy, warto visibility, and participants in the Forum take a look and get in touch with effective Innovation 4.0 with specific crocuses for realizing:
- Vіdrodzhennya іsnuyihih and recognition of new special special economic zones, the territory of the first priority development and the guarantee of state guarantees for investors on the legislative level. Adopt bills to renew fiscal and other incentive incentives for industrial parks.
- Development of effective and efficient investment incentives (otherwise, manual control and total control).
- The creation of a new efficient investment model of Ukraine - that demonstration of such moves on the international maydanchiks of Ukraine.
- Budvnitsvvo іnnovatsіyno іkonomіki, development and acquisition of Ukrainian IT before promyslovost і zokrema to the robot cluster.
- In the provincial regional economical development.
- Law submission to the regulation of dual sanctity.

Strengthen the necessary kraki, like є changing the mind’s active development of clusters, є nevid’m a lot of the partial process. Acts with them to demand the uninterrupted active participation of the state, no less, an important aspect - the very same business and the participation in the market and the region in order to reach not only the full flow of the country, but also the whole. And all at once with winter - and Maybuty of new generations.

Meeting with leading experts from the Confederation of Danish Industry (DI)