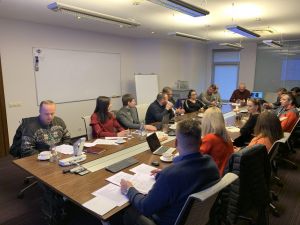 On November 14, under the coordination of the Federation of Employers of the Automotive Industry, a meeting of the Production subgroup was held within the framework of a working group on the development of electric transport in Ukraine.

The agenda of the meeting included the final questions on the consideration of definitions of electric transport for the legislation and the charging infrastructure, the plan of changes and proposals for draft legislative acts to support the production of electric vehicles and chargers, as well as the implementation of Ukraine's electric and mobile strategy in terms of demand and production. It should be noted that this time the event was attended by representatives of two relevant ministries of Ukraine (the Ministry of Infrastructure and the Ministry of Economic Development and Trade). As before, the event was actively participated and expressed the position of automakers and representatives of the relevant associations of Ukraine in the field of environmental transport: Ukravtroprom, EV-UA - Ukrainian Association of Participants of the Electric Vehicle Market, Federation of Employers of the Automotive Industry, Corporation "Bogdan", Eurocar company, AVER Ukraine, DelFast, BRDO Ukraine, BYD representatives, ElectroCars club Murmuration technology company and others.

In discussing the prospects for electrification of transport in Ukraine, there were still questions about the most correct definitions of all categories of electric transport in the Law of Ukraine on Road Transport, because it is the so-called "starting point" of further innovations and changes for the use of environmental cars. It is gratifying that the first steps have already been made thanks to the fruitful cooperation with the Ministry of Infrastructure of Ukraine on definitions in the legislation of Ukraine, such as electric car, electric truck, electric bus, electric charging station, the relevant changes in the law are already under consideration by profile specialists and within a week should be approved and submitted to the CMU.

Equally important was the issue of municipal electric transport (electric buses, electric trucks) in major cities of Ukraine. Therefore, in the continuation of the first meeting, they considered all the remarks, suggestions and alternative options for stimulating the manufacturers of electric vehicles, in particular electric buses and trolleybuses. After all, the electrification of urban transport in the context of urbanization underlies the movement to reduce pollution of the densely populated areas, as well as to significant savings and diversification of energy consumed. Therefore, during the Battle of Thoughts process, they identified proposals for a tax credit to such automakers and project proponents intend to prepare a draft law for consideration at the next working group meeting. In addition, they agreed on the introduction of 50% of the quota by 2031 in the fleet of utility companies, local and central authorities, which will create real demand and the possibility of long-term planning of production and investment for the national producer.

The new Verkhovna Rada of Ukraine has had the opportunity to take real steps to improve life in Ukraine. Therefore, we hope that a constructive dialogue between business, the public and the authorities regarding the development of an electromobile strategy and the speediest legislative regulation of the industry will bring fruitful results to every citizen of Ukraine.